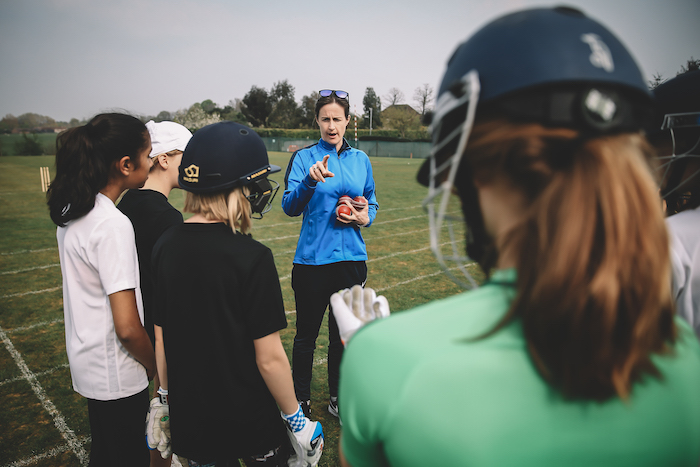 England cricket legend Lydia Greenway has today announced the launch of her newest project, the Girls Cricket Club, a trailblazing platform to accelerate the growth of female cricket around the world through the sharing of knowledge, resources and opportunities.

The announcement comes in time for Women’s Big Cricket Month, an ECB initiative in June to give more women and girls the opportunity to experience cricket, and the inaugural Hundred tournament in July which will see men’s and women’s competitions run alongside each other and headlined with a women’s match in a historic moment for gender equality in the sport.

The Girls Cricket Club will complement Greenway’s successful Cricket for Girls, which will continue to focus on building successful girls cricket programmes in schools and clubs by developing the teachers and coaches, whilst the new platform will focus on the players. The Girls Cricket Club aims to connect female cricketers around the world, serve as an independent voice for girls and women within cricket and to provide female-specific resources to girls and women of all ages and backgrounds.

Greenway is also soon to announce an exciting new concept as a product of the Girls Cricket Club which aims to uncover the world’s next best female cricket all-rounder in a showcase of athleticism and skill within the women’s game. Details will be announced at a launch event in June at Trent Bridge Cricket Ground.

“Ultimately we want girls to feel a sense of belonging within cricket and to promote the message that cricket is equally as much female as it is male. We’re creating opportunities for girls of all backgrounds to fall in love with the game and to benefit from sport – whether that’s going on to play at the highest level or to make amazing friends, develop confidence, leadership skills and find a community. Our ethos is progression, not perfection and that applies both on and off the pitch. It’s about harnessing the power of sport to achieve in all aspects of life,” says Greenway.

“Advocacy is an important pillar for us. While we’ve come a long way and are seeing some amazing initiatives and opportunities within the women’s game, there is a still a way to go reach equality within our sport. We’re lucky to have Advisory Board members from all facets of the game who will be our eyes and ears and lead us on our mission,” Greenway says.

The Girls Cricket Club supports both the ICC’s 100% Cricket campaign to encourage 1 million girls to take up cricket in the year ending 2021 and the ECB’s £20M action plan to make cricket a gender-balanced sport as part of its Inspiring Generations strategy for 2020-2024.

First on the agenda for the Girls Cricket Club is a free cricket skills session to be held over Zoom at 10.30am on Tuesday 1st June. The session is open to girls of all ages and abilities and will be hosted by Lydia Greenway, with a special guest appearance from England Captain Heather Knight. A full schedule of face-to-face camps will be announced on the Girls Cricket Club website shortly.

To keep up to date and to sign up for the free Zoom skills session head to girlscricketclub.com

About the Girls Cricket Club

The Girls Cricket Club is a global platform, built by girls, for girls. Cricket has long been known as the gentleman’s game, but we know that term doesn’t even begin to describe our beautiful diverse cricket community. We exist to celebrate the fact that cricket is equally as much female. In fact, we’ve been playing just as long as the men, with the first recorded female match played as early as 1745. We also know that cricket isn’t only for the posh and privileged. It’s a game for everyone, of any age and any background. The Girls Cricket Club is a place for female cricketers, to share knowledge, resources, inspiration, and opportunities. It’s a supportive and welcoming environment for girls to feel a sense of belonging within cricket and where we can serve as an independent voice for females within the game. Founded by England cricket legend Lydia Greenway, the Girls Cricket Club is about creating opportunities for development both on and off the field and providing resources specific to girls and women to support them on their sporting journey. The Girls Cricket Club aims to reach girls who may not otherwise be exposed to cricket and to provide them with equal opportunities to play the game.